Journey to the Overland

After hearing about this solo tabletop game, I knew it was something that needed to be on my table.

I just unpacked everything and will attempt a detailed review sometime later in the week. 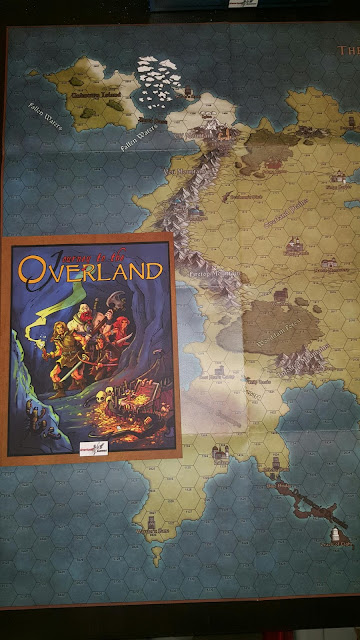 Posted by MindlessMuse at 4:52 AM No comments:

Email ThisBlogThis!Share to TwitterShare to FacebookShare to Pinterest
Labels: Journey to the Overland 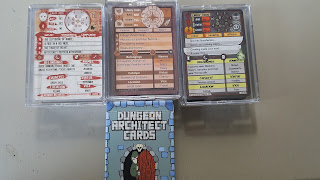 More on this shortly, but figured I would share today's deliveries.

Dungeon Architect Cards from Far Away Land.
Posted by MindlessMuse at 12:28 PM No comments:

Tasked with attempting to locate the missing cleric, Culsep the warrior monk has been hired to find out what happened and if possible return Brother Klavius.

Upon entering the last known location, Culsep was instantly greeted with a patrol of Lizardfolk (7HD - 5 Minions / 2 Elites).  It seems that the reports of the locals is true as this area as it does appear that they have taken up residence in the old temple.

Seeing this many on patrol, Culsep is pretty sure he is in the right place and charges into the group ahead.  With his strength and size, he easily dispatches the first couple in the group causing a morale check, which they pass.  Seeing their friends taken out so easily must have startled the rest as none of their attacks hit their mark.  Quickly seizing the advantage Culsep quickly took are of the remainder without so much of a scratch.

Continuing deeper into the temple, Culsep came upon the Garden, but upon entering the room he was spotted by small band of creatures huddling over something.  But these creatures also had a human among them...

The battle with this group seemed to last quite longer as they got in a couple of decent hits (3 dmg) to Culsep, but in the end he managed to come through with very little more than a scratch.

After sifting through their belongings and applying a few bandages, Culsep decided to press on as with this much action, he felt he already might be too late.

Peeking his head out of the Garden, he noticed another patrol in the adjacent hallway, unfortunately they also noticed him and he was forced back into action.

Just like the earlier patrol, Culsep was able to strike down a few of their members with ease.  It might have been this feeling of superiority that soon found him swinging wildly as his opponents landed blow after blow felling our hero.

While this result was not what I had hoped, I definitely believe I played it better as I understood more after my 1st adventure and seemed to be getting into a small rhythm with asking questions and consulting charts.

At this point, I believe this Temple is way too tough and we might head into the wilderness to search for some clues as to why the Lizardfolk have moved from the swamp and taken up in the 'Cursed Temple of Yamiz'

This was my first attempt at any type of Solo RPG using the Scarlet Heroes system.  I realized now that I made a few mistakes along the way, but as with all things, the more you experience, the more you learn.

As reports of a disturbance on the edge of the forest made way back to Klavius, he knew he would soon be summoned to investigate.

There had been strange sightings of what folk were describing as lizard men wandering around the old abandoned temple and it was time for him to see this for himself.

Unfortunately for Klavius, the threat of journey had risen well above expectations as he found himself just outside the entrance on his knees preparing one of his most trusted spells for the day.

Upon entering he could tell that indeed the temple did have new occupants as he could hear the rumblings and what sounded like chanting echoing throughout the hallways.

He had ventured into this temple before, but only to the first room, which was once thought to be a garden and place for those traveling to rest and take a moment to pay their respects to a few of the statues of the former leaders of the order.  Once he made his way to the familiar setting he looked around cautiously, but found nothing out of the ordinary as the room was still in the same dilapidated condition it had been a few months earlier when he was here to seek out any forgotten treasures that might be hidden amongst the ruins.

After turning up nothing new and no signs that anyone had been there, he decided to venture further and out of the west leading door that lead into a long hallway with what appeared to be some sort of room to the south and a long dark hallway to the north.  It was then, while looking north that he first saw what appeared to be the silhouettes of 3 human looking forms walking towards him.  Klavius readied himself as they gave no notion of pausing nor response when he called out to them and as the shapes came more into view, he now saw what he could only describe to himself as malformed humans with scales and sharp fingernails almost resembling claws where a man's hands would have been.

He then decided that he must take action as he had not knowingly, backed away from the entrance to the garden room and they now stood in his path of escape.  He lashed out at the closest with his trusted sword, but missed as the creature appeared to dodge out of the way.  Before Klavius could ready himself for another strike the creature struck out and landed a long scratch like mark that cut throw the creases in his armor to do damage to his arm.

This battle went on as slowly and painfully Klavius was able to incapacitate all 3 of the lizard type creatures, using up his prepared prayer in the process, but suffering major wounds in the process as his armor appeared to not fully protect him as he thought.

Klavius really should have retreated to the safety of the garden, but instead decided to press on as he was up against the door leading the room at the south end of the hallway.  Upon opening the door, a trap of some sort was triggered and he had to act quickly to dodge out of the way swinging object now heading straight for his head.

Once the swinging pendulum had come to a rest he gathered himself up off the ground and started to look around when all of a sudden 3 more silhouettes appeared in the corner and started making their way towards him.  Unfortunately, this time Klavius was not as gifted with his strikes as the enemies surrounded him and began to claw and bite at him with a feverish pace.  Klavius succumbed to his wounds shortly after only barely wounding one of his assailants.

Posted by MindlessMuse at 4:32 AM No comments: